The virtual and real worlds are growing ever closer together – and are leading to “Industry 4.0” 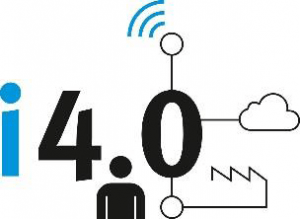 The organs in the human body are supplied by the circulation of the blood. Each one gets exactly the substances needed and contributes to keeping the whole body healthy. This is exactly the way a flexible and reliable production process behaves. The required material must arrive at the appropriate place, at the right time and in exactly the right sequence. Only in this way can each area of the Technology Plant make its contribution towards maximum efficiency.

Increased digitisation is one of the basic prerequisites of this process, which merges modern information and communication technologies with conventional industrial processes and uses them to create cyber-physical systems.

On the way to the production of the future
The real and virtual world are growing increasingly closer together, modern information and communication technologies are merging with industrial processes and are thus increasingly changing the production landscape. Industry 4.0 brings together various activities under one term and thus describes the change that is imposing new requirements on production systems, machines and people in many areas.

Human-machine interaction
Working hand in hand with a robot, controlling complex facilities with a smartphone or tablet PC: in the production of tomorrow, direct interaction between man and machine will be part of the daily routine. Besides simple and intuitive operation, safety is above all a key aspect – under no circumstance may the person be injured by the machine.

Machines and robots with comprehensive safety systems and corresponding sensor technology will make this possible in future – man and machine will be able to move in the same working space and work together without a protective cage.

One example of this is the assembly robot used in Scharnhausen, Germany which was developed by Festo in close consultation with the trade association. It is one of the few robots in Germany that is allowed to work alongside people without a safety enclosure, and relieves its human colleagues in the valve assembly department from performing monotonous, ergonomically repetitive tasks. Sensors monitor its movements: as soon as an employee comes too close, the robot comes to a complete stop.

Data acquisition and analysis
In the production of the future, information technology will play a major role – both when it comes to operating and controlling production facilities, as well as collating and evaluating machine data and information about energy consumption. Data collection and processing are increasingly possible in real time. New analysis options are emerging, for instance for a proactive maintenance service or a holistic view of energy flows and consumption.

An energy transparency system implemented at the Scharnhausen Technology Plant by the middle of 2017, which acquired data – where reasonable – down to the machine level and looks systematically at how it interacts. Software applications and apps enable the consumption data to be displayed on mobile devices and thus accessed directly on the shop floor.