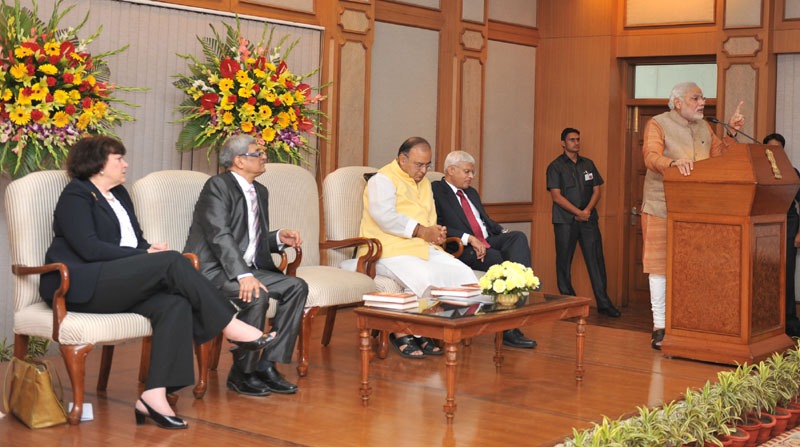 The Prime Minister released the book, “Getting India Back on track – an action agenda for reform”, in a function at 7, Race Course Road, New Delhi today. The book is edited by Bibek Debroy, Ashley Tellis and Reece Trevor, and published by Carnegie Endowment for International Peace.

Universities should be actively involved in research and analysis of the developmental process, to contribute in the best possible way for policy-related decisions, Shri Modi said.

He said, in infrastructure, the focus needs to shift from highways to “i-ways”, and optical fibre networks. He said cities in the past were built on river-banks. They are now built along highways. But in future, they will be built, based on availability of optical-fibre networks and next-generation infrastructure.

The Prime Minister said urbanization should not be treated as a problem, but as an opportunity. If we have to generate employment and change for the better, we plan to build 100 smart cities.

The Prime Minister cited the three colours of the National Flag, to suggest revolutionary agendas of futuristic growth.

Beginning with green, he said we need to bring about a second green revolution – focusing on increased agro-productivity, value addition, agro technology, and decentralization of warehousing.

Referring to white, he said a white revolution must now focus on increasing milk productivity, and developing a support system for ensuring cattle health.

The Prime Minister said, saffron colour represents energy – and we need a saffron revolution that focuses on renewable energy sources such as solar energy, to meet India’s growing energy demand.

Inspired by the blue colour of the Ashok Chakra in the National Flag, he said the blue revolution should focus on the fisheries sector, including ornamental fish.

Shri Modi stressed on the need for water conservation, and emphasized the importance of micro-irrigation, which would lead to “per drop, more crop.” He said that micro-irrigation had been successful in improving productivity and quality in crops like sugarcane in Gujarat.

He said we need to exploit the demographic dividend, as 65 percent of our population was below 35 years of age. For this skill development needs to be a priority area. Referring to skills such as teaching, nursing and paramedics, he said good teachers were one of the biggest needs of society, but there are very few good teachers available. Can India become an exporter of good teachers who would capture the imagination of an entire generation globally, the Prime Minister asked. He said if India has to compete with China, the focus should be on skill, scale and speed.

Talking about the need to combat the challenge of global warming and climate change, the Prime Minister said that a civilization that treated rivers as mothers, did not need to learn about environment protection from a western mindset.

Speaking on the occasion, Minister for Finance, Corporate Affairs and Defence, Shri Arun Jaitley said there could not have been a more appropriate time for release of the book. He said Governments should not only have the will to rule, but also the credibility to rule. He said the international community was once again looking at India, and it is an opportunity that we cannot afford to miss.

PrevPreviousDr. Harsh Vardhan Requests Chief Ministers of All States For Their Cooperation To Set Up Super-speciality Hospitals Modelled on All India Institute of Medical Sciences (AIIMS) In Their States
NextHRD Minister, Smriti Irani Expresses Grave Concern over Mandi IncidentNext