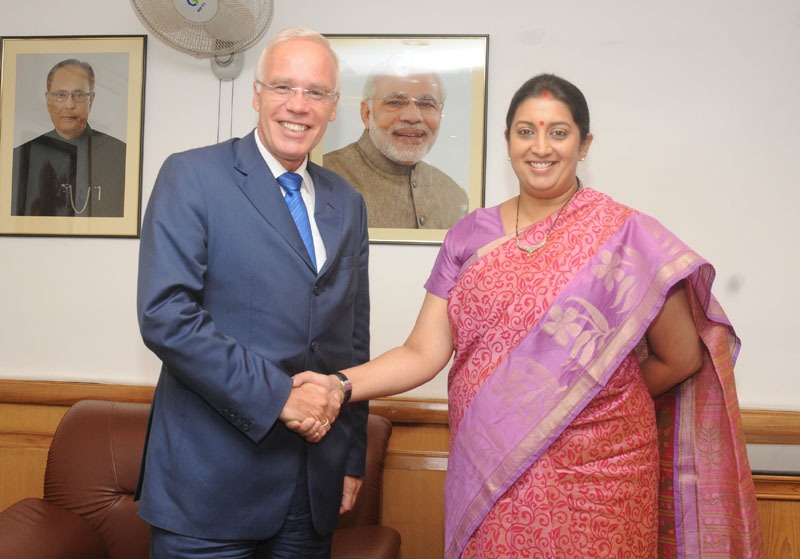 Mr. Eivind S. Homme, Ambassador of Norway to India met Smt. Smriti Irani, Union Minister for Human Resource Development at New Delhi today. The Ambassador expressed the hope that under her leadership, education ties will be further strengthened between India and Norway.

A collaboration between India and Norway in the high altitude studies, particularly for the National Institute of Himalayan Studies announced in the General Budget this year was taken up by the Union HRD Minister. She also emphasized on collaboration in the area of energy studies.

The Minister also talked about the Joint Research Programme being planned by India and Norway in thematic areas like clean energy, climate change, Arctic studies, oceanography, information security, biotechnology, marine sciences, geo-hazards etc. with the financial commitment of Rs. 8.5 crore from each side over a period of five years.

Ambassador Mr. Eivind S. Homme highlighted that Norway places great emphasis on girls’ education throughout the world. The Union Minister Smt Smriti Irani reciprocated by saying that education and empowerment of girls is a priority topic for her, both as a Minister as well as an individual. She highlighted that “Beti Bachao, Beti Padhao” – “Save the Girl Child, Educate the Girl Child” has been announced by the Government focusing on the girl child.