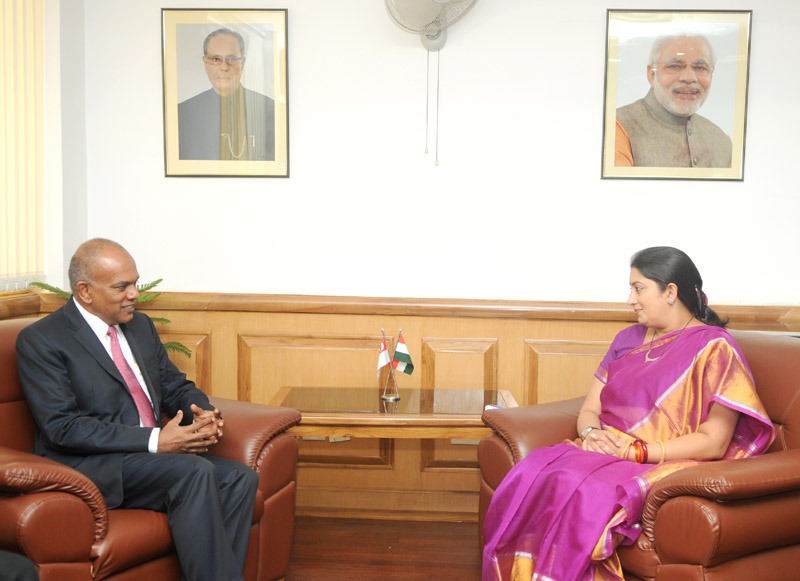 Mr. K. Shanmugam, Minister of Foreign Affairs and Minister of Law, Republic of Singapore met the Union Human Resource Development Minister, Smt. Smriti Zubin Irani, at New Delhi today. During the meeting, the Minister Mr. Shanmugam mentioned about the close relations between Singapore and India and the multifaceted partnership of the two countries in the field of economic cooperation, defence & security issues and education & culture. He also mentioned that both countries are celebrating 50 years of establishment of diplomatic relations from August, 2014-2015 onwards for which year-long activities are planned, highlighting our vibrant partnership.

HRM reciprocated the feelings of the visiting Minister and recalled the warm relations and strong bonds that exist between the two countries. As part of the celebrations of 50 years of establishment of diplomatic relations, she offered Singapore to be the Guest of Honour Country during the next New Delhi World Book Fair to be held from 14-22 February, 2015. The HRM also mentioned that the National Book Trust of India is translating many books of Singapore, including the book titled "50 Stories from My Life" authored by the former President of Singapore Shri S.R. Nathan.

Both the Ministers also discussed further strengthening of educational relations and suggested a platform of officials which could regularly meet to charter a way for collaboration, particularly in the field of Science Education, Research and Skill Development. The HRD Minister also proposed an 'India Connect' Programme to enable students of Singapore to visit educational institutions in India.

Share on Social Media
Previous article Marrakesh Treaty to Facilitate Access to Published Works for Persons Who are Blind, Visually Impaired, or Otherwise Print Disabled Next article The Union Budget 2014 Has Many Aspects Which Would Promote Education In The Country: Union HRD Minister Smriti Irani