President Calls for Expansion of Education Facilities in the Country 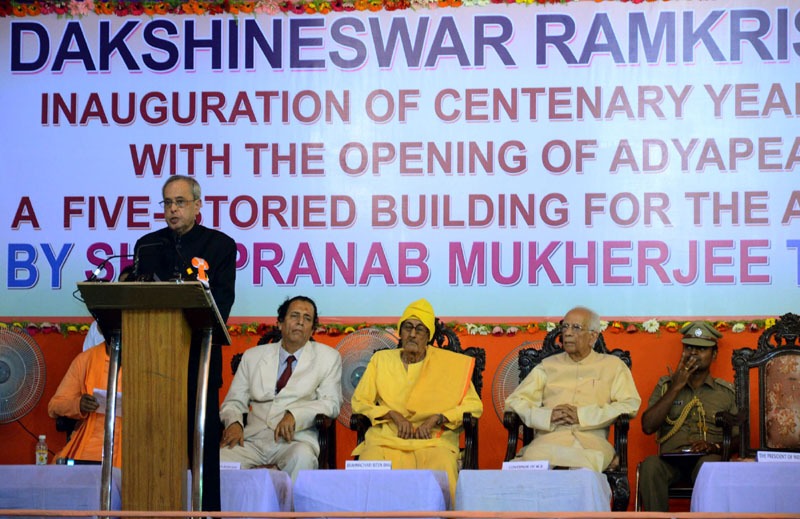 The President of India, Shri Pranab Mukherjee participated in the celebration of the 100th year of the advent of the Divine Adya Mata organized by Dakshineswar Ramakrishna Sangha Adyapeath at Kolkata yesterday (April 2, 2015). He also inaugurated AdyapeathAnnada B.Ed. College and an orphanage for boys on the occasion.

Addressing the gathering, the President said he was pleased to see the numerous activities that have been taken up in the various centres of the Dakshineswar Ramakrishna Sangha Adyapeath - particularly the old age home, the home for widows, the charitable dispensary, the girls’ school, Sanskrit Mahavidhyalaya and Teacher Training Institute. The Adyapeath has never discriminated against any religion or caste or section of society. It is a symbol of communal harmony that has opened its doors to give local inhabitants medical treatment and spiritual succor.

The President stressed the need for expansion of primary, higher and tertiary education facilities in the country so as to enhance opportunities of employment for younger generation. He appreciated the contributions of the Adyapeath in this regard as well as its initiative to set up a B. Ed College and give a home to thousand orphan boys.

Referring to the golden era of education in the country between 3rd Century BC and 12th Century AD when universities like Nalanda existed in the country, the President said students and scholars from various foreign nations used to come to India for higher studies. But after the 12th Century AD, our education system started losing its glory. The President said the quality of higher education in the country must improve. The 11th Five Year Plan made provisions for improving the quality of higher education in the country. India has over 700 Universities (including 48 Central Universities), 16 IITs, 30 NIITs and around 36,000 Degree colleges. Nearly 2 crore students participate in informal and tertiary education. Despite these numbers, international education rating agencies have not placed any of these institutions within the best 200 of the world. The President called upon educational institutions to encourage innovations and research by students.