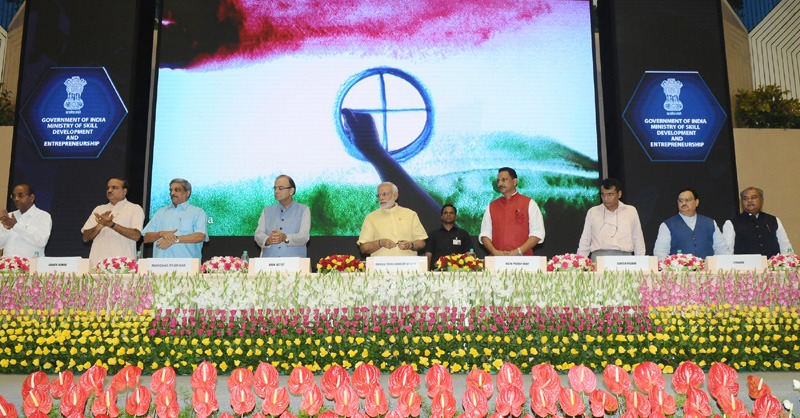 Several Chief Ministers, State Ministers, Secretaries to the Government of India and other representatives from central and state governments were also present at the event. Foreign dignitaries, including Ambassadors and High Commissioners, senior industry leaders, representatives of multilateral organizations and from industry associations also attended the two-hour long main function. ITI faculty, skill trainers and trainees from a range of training programs also participated.

The Skill India logo depicts a clenched hand in which a spanner and pencil are firmly held, exemplifying the empowerment of the individual through skilling. The spanner and pencil are held together, suggesting that both skill and general education are at parity and aspirational for India’s youth. The tagline, ‘Kaushal Bharat, Kushal Bharat’ suggests that skilling Indians (‘Kaushal Bharat’) will result in a happy, healthy, prosperous and strong nation (‘Kushal Bharat.’) A short film unveiling the logo was shown, which featured the Sanskrit chant ‘SarvadaVigyataVijaya,’bmeaning ‘Skill Always Wins.’

The Pradhan Mantri Kaushal Vikas Yojana (PMKVY), the Ministry’s flagship, demand-driven, reward-based skill training scheme will incentivise skill training by providing financial rewards to candidates who successfully complete approved skill training programmes. Over the next year, PMKVY will skill 24 lakh youth, across India. For the first time, the skills of young people who lack formal certification, such as workers in India’s vast unorganised sector, will be recognised. Through an initiative known as ‘Recognition of Prior Learning’ (RPL), 10 lakh youth will be assessed and certified for the skills that they already possess.

Prime Minister also launched the Skill Loan scheme. Loans ranging from Rs 5,000-1.5 lakhs will be made available to 34 lakh youth of India seeking to attend skill development programmes over the next five years.Sanction letters for the first ever Skill Loans were handed out by the Prime Minister to aspiring trainees.

The Prime Minister addressed the audience, articulating a clear overarching vision for Skill India. He highlighted the centrality of skills to India’s development and called on government, private sector and India’s youth to work together to make this vision a reality. The Prime Minister also highlighted the potential for skilled Indian youth to be recognized around the world. He congratulated six award winners from WorldSkills Oceania, an international skill competition and wished them success as they go on to compete at the World Skills Competition in Sao Paolo next month.

Across the country, 2,33,000 youth were awarded certificates from ITIs, and 18,000 plus graduating students received job offer letters on the occasion of World Youth Skills Day. The Prime Minister personally presented industry job offer letters to five female ITI graduates at the event.

The Finance, Corporate Affairs and Information & Broadcasting Minister Shri Arun Jaitley shared his vision and commitment for Skill India and highlighted the importance of coordination of skill development efforts across Ministries through the National Skill Development Mission.

The Minister of State (Independent Charge) of Skill Development and Entrepreneurship welcomed the audience at the outset of the event. He outlined the steps the Ministry of Skill Development and Entrepreneurship is taking to turn the Prime Minister’s vision of a skilled India into reality. He also underscored the importance of strategic partnerships in achieving the Skill India vision, showcasing inter-Ministerial initiatives to scale up skill development efforts.

Earlier soon after reaching the venue of the main event, Prime Minister Shri Narendra Modi visited a demonstration of the Safeducate Container School installed at Vigyan Bhavan for the e
vent. India’s first Container School was set up in Ambala by Safeducate by refurbishing discarded containers and using them for skill training in logistics. 189 students per month will be trained using four such containers under PMKVY with a view to scale up skill initiatives quickly in areas with low levels of infrastructure.

At the exhibition, the Prime Minister interacted with students across the country through a distance learning tool being used to deliver training of trainers at 200 ITIs, with plans to deliver training directly to students. He launched the Apprenticeship portal, a one stop shop for apprenticeship related issues, which can be used by industry, students and trainers alike. He also viewed a demonstration of six simulators (drone, weaving, fork lift, tractor, driving, welding) being used to deliver skill training at centres across the country by Tata Consultancy Services.

World Youth Skills Day and the launch of SKILL INDIA were celebrated nation-wide. State Governments organized events to emphasize the importance of skill development for the youth in their states, mobilizing candidates, launching fresh training programs and felicitating successful trainees. ITIs across the country also participated in the event through a live feed of the event.

Across India, special PMKVY mobilization camps are being organized at 100 locations with Nehru Yuva Kendra Sangathan (NYKS). A national SMS campaign is being rolled out to build awareness of the program, reaching about 40 crore subscribes. Fresh PMKVY training was initiated in 1,000 centres across all States and Union Territories in India today, covering 50,000 youth in 100 job roles across 25 sectors. In New Delhi, Shri Rajiv Pratap Rudy flagged off 150 Skill Vans to create awareness among people of Delhi and NCR region on government’s policies and initiatives on skill development. He said that the government has set a target to provide skill training to 40.02 crore people by 2022.