The 63rd Meeting of the Central Advisory Board of Education (CABE) was held under the Chairpersonship of Union Human Resource Minister Smt. Smriti Irani at New Delhi today.

In her opening address the Union Minister of Human Resource Development highlighted the achievements of the Ministry in promoting quality education to all through new and impending initiatives such as the Pandit Madan Mohan Malaviya National Mission on Teachers and Teaching (PMMMNMTT), SWAYAM (Study Webs of Active-Learning for Young Aspiring Minds), the Global Initiative of Academic Networks (GIAN and the Rashtriya Aavishkar Abhiyan (RAA). She stressed their importance and catalytic role in transforming the education sector and sought the cooperation and active participation of the States and Union Territories in their implementation.

She dwelt on the consultative and inclusive process of evolving, after 29 years, a New Education Policy, one that would be in step with the inevitably changed perspectives and aspirations, and with the needs of the country and the economy. The multi-layered and wide ranging process involves the people right from the grassroots, with meetings from the village level moving upwards to the State through Blocks, Panchayats, Districts and Urban Local Bodies (ULBs). The Chairperson requested the States to initiate the grassroots consultation and keep the HRD informed of the progress.

The Chairperson informed the meeting that she would be visiting the States through the month of September to continue a process of two-way engagement and dialogue.

A number of decisions were taken at the meeting, in part flowing from the agenda, and in part stemming from concerns raised by the State Governments and experts.

It was decided to constitute three Sub-Committees of the CABE, to consider respectively, a) issues and impediments to mainstream out-of-school children, and measures to bring them into the fold of the educational system, b) measures and suggestions to improve the infrastructure, environment maintenance and learning outcomes of Government schools, c) measures to improve and enhance skilling and technical education in the school and higher education systems. These sub-Committees, each with representatives of States, academia and experts would give their report and recommendations within a year.

Members of the CABE considered ways to encourage school and college students to participate in the National Cadet Corps and the National Service Scheme, which inculcate discipline, foster national integration and promote community service. It was felt that these were extremely important, and beneficial for the growth and learning of the students, as well as valuable to society. These activities could form the core of a series of activities, appropriately structured which would form an integral part of the learning process for students – other activities, also co-curricular in nature could include the performing and creative arts, as well as community service. 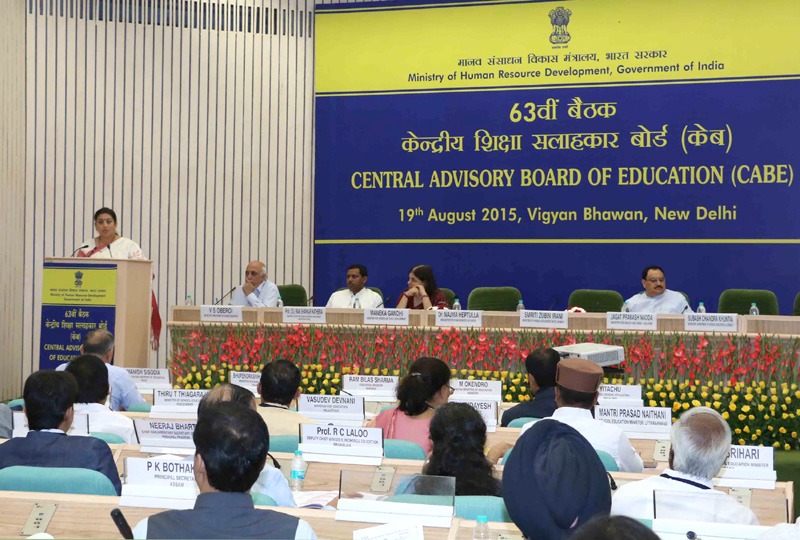 The CABE took up consideration of the issue of lightening the burden of school children. A range of views and suggestions were put forward.

It was decided that a special meeting to discuss about teaching, teacher training and recruitment will be held by the Ministry of Human Resource development with State Ministers in early October, 2015.

There was a broad consensus at the meeting, with State Governments being unequivocal in suggesting that the ‘No-Detention’ policy be revoked. Education Ministers, representatives of the States and CABE members unanimously agreed on the need to do so. However, GOI proposed that the State Governments should formally provide their views, in writing, within 15 days, to the Ministry of Human Resource Development, which would consider the next steps, based on these recommendations.

Education Ministers of 19 States, representatives of 29 States and Union Territories, Members of CABE, heads of autonomous organizations, Vice Chancellors of Universities, senior academics were present in the meeting. V.S. Oberoi, Secretary, Department of Higher Education and Member Secretary, CABE and Dr. Subash C. Khuntia, Secretary, Department of School Education and Literacy were present in the meeting along with senior officials of the Central and State Governments.

Share on Social Media
Previous article All You Educational & Training Needs Under One Roof! Worlddidac India 2015, Bengaluru Next article Signing of MoU India and Australia on Cooperation in the fields of Education, Training and Research