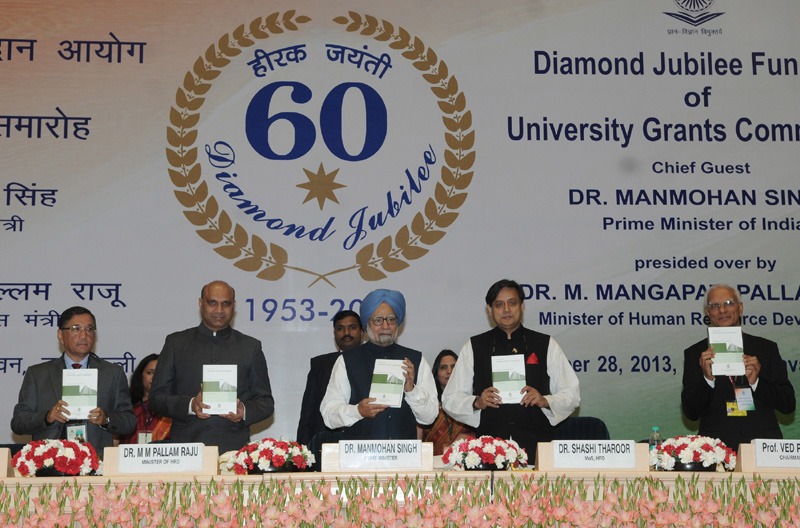 The Prime Minister has asked the University Grants Commission (UGC) to play the role of a national Think Tank for the promotion of Higher Education in the country. Addressing the Diamond Jubilee celebration of the Commission in New Delhi today, Dr. Manmohan Singh appreciated the role of Commission as a principal regulator of Higher Education in the country. He said the Government has put unprecedented emphasis on education at all level in the last ten years. Giving details of the expansion in the Higher Education in this period, the Prime Minister said, Gross Enrolment Ratio has gone up from 11% in 2005-06 to 19.4% i 2010-11. Twenty three Central Universities, 7 IIMs,9 IITs, 10 NITs and 4 IIITs have been set up by the Central Government .Highlighting the role recently launched Rashtriya Uchttar Shiksha Abhiyan(RUSA) will play in promoting Higher Education in the Country, Dr. Singh said the scheme aims to create 278 new universities and 388 new colleges and to convert 266 colleges to Model Degree Colleges by the end of the current five year plan ending 2017. The scheme will also provide infrastructure grants to 286 state universities and 8500 state colleges

Enumerating the challenges in the Higher Education , the Prime Minister who was himself the Chairman of the UGC in 1991, Dr. Singh said quality in general remains a huge concern that even our premier institutions do not figure among the best in the world. Shortage of Faculty and promotion of Research , Strengthening of the university -industry interface and higher allocation of resources are the areas which require attention. The Prime Minister also announced instituting awards in the name of Pandit Jawahar Lal Nehru for individual excellence in the areas of Science, Humanities and Social Sciences, Technology, Fine Arts and Culture.

Speaking on the occasion the HRD Minister, Dr. M. M. Pallam Raju said that UGC will launch Chair in the name of the Indian Nobel Lauerates including in the name of C.V. Raman, Rabindra Nath Tagore, Mother Teresa. He said the government has focused on access. for the weaker sections of the society and the minorities by giving scholarships and equal opportunities. He said that the government is keen to promote Research and more funds are being earmarked for them. Dr.Raju informed that the government is keen to give more autonomy to universities.

The Chairman of the UGC, Dr. Ved Prakash said the Commission has been given the additional charge of Distance Education. It is also taking several steps to ease the constraints caused by the paucity of quality faculty by engaging Recharge Programs and appointing contractual faculty.