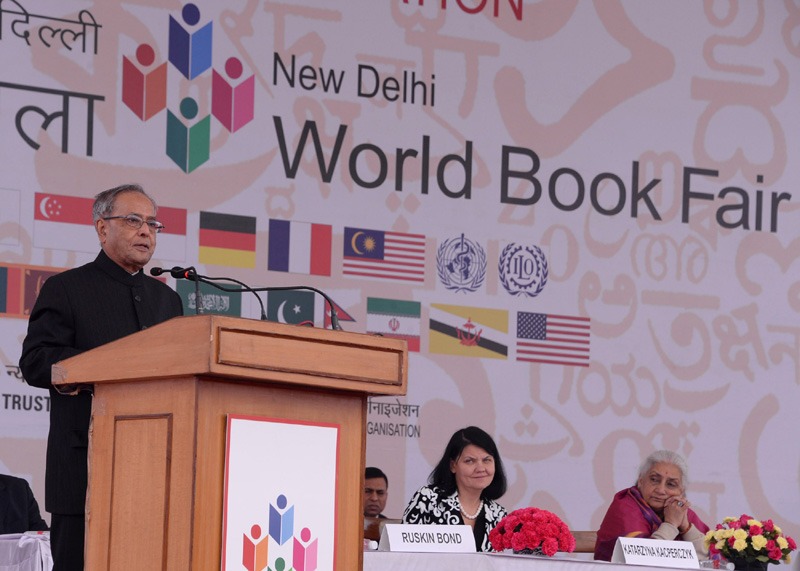 The President Shri Pranab Mukherjee today inaugurated the New Delhi World Book Fair 2014. Speaking on the occasion, he said that an international book fair of this magnitude is one of the best manifestations of India’s liberal, democratic, multi-lingual, multi-cultural and secular society where competing ideas and ideologies have equal space. These values constitute the essence of India and that we must do everything possible to preserve, protect, promote and nurture these ideals.

He also said, “India’s pluralism and social, cultural, linguistic and religious diversity is our greatest strength and a multiple source of inspiration for every Indian and that we must be uncompromising in rejecting intolerance, prejudice and hatred. Book fairs such as this should remind us that our history and traditions have always celebrated the ‘argumentative’ Indian and not the ‘intolerant’ Indian. Multiple views, thoughts and philosophies have competed with each other peacefully for centuries in our country and freedom of speech is one of the most important fundamental rights guaranteed by our Constitution”.

Appreciating the Fair the President said, “It is an important initiative which helps spread reading habits and contributes to creating a book culture within our community. Reading not only enriches knowledge but helps us socially connect. Books carry the wisdom of generations. Reading helps widen views, encourage imagination and expand mental horizons”.

On the theme of this year fair “Kathasagara: Celebrating Children’s Literature”, Shri Mukherjee said that children are the best readers of literature because they have no patience for pretence. He said that India has had a long and rich tradition of literature written for children as manifest in our folk and oral storytelling traditions, panchatantras, mythologies, puranas, jataka tales etc. Literary giants like Rabindranath Tagore, Premchand, Abanindranth Tagore and Sukumar Roy have written for children.

He said, “No human society can develop in all its dimensions if it does not produce meaningful literature for its children and young readers. I call upon authors, publishers and the Government to do their utmost to promote children’s literature. I also appeal to parents and teachers to inculcate in children the habit of reading at a young age itself. Implanting the habit of reading in children will ensure that it becomes a skill that stands them in good stead throughout their lives.”

The President said that India is one of the top six publishing countries in the world today. In terms of English-language books, it is the third largest after the US and the UK. The number of books being published in India is estimated to be growing at 25-30% every year. While this reflects the growing hunger for books among the masses, it also reflects a story that is integrally linked with India’s growth as a knowledge economy. Our oldest scriptures prescribed that the framework of society should be established around the pillars of knowledge. Our challenge is to convert knowledge into a democratic force and take it into every corner of our country. There is a great hunger for knowledge in our country. As a nation, our motto, therefore, should be “All for knowledge, and Knowledge for all”.

Presiding over the function, the Union Culture Minister, Smt. Chandresh Kumari Kumari Katoch urged the parents and teachers to inculcate the love for reading among the children. She said the advent of digital technology has adversely affected the younger generations reading habit. The Minister underlined the role of books in freedom movement.

The Secretary of State for Culture of Poland, Ms. Malgorzata Omilanowska recalled that the Princely state of Jamnagar in Gujarat had given refuge to five thousand Polish migrants during Second World War. She said her country will like to promote more people to people contacts with India particularly in the field of art and culture.