India and Israel Pledge US $ 5.0 Million per year for Joint Research Programmes to Further Strengthen Cooperation in Education Sector 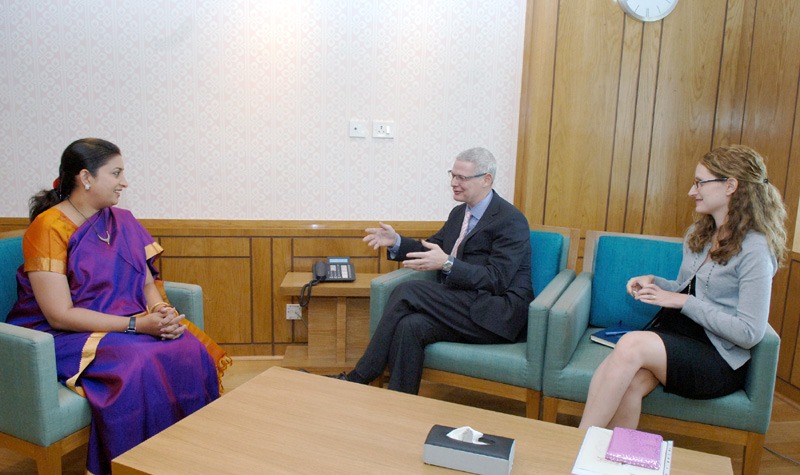 Mr. Alon Ushpiz, the Ambassador of Israel to India met Mrs Smriti Irani, Hon'ble Minister of Human Resource Development, on 29th May, 2014 to discuss strengthening of educational relations between India and Israel.

Recalling the close ties in different fields like Science and Technology, Education, Culture, Economic, Commercial etc. between India and Israel, the Hon'ble Minister stressed that education is an engine of growth and collaborative knowledge creation is very important for building a better world.

During the discussion the new Joint Research programme between India and Israel was taken up in which both countries have pledged to take up joint research programmes amounting up to USD 5.0 million per year. It was highlighted that in the first round 66 joint research proposals have been received and the evaluation by the experts from both the sides will start today and will be completed by June, 2014.

Ambassador Mr. Ushpiz informed that Israel offers 200 Post Doctoral fellowships of which about 80 percent are availed by the Indian students. Hon'ble Minister was happy to learn that Israel is also launching another scholarship programme of 40 slots for bachelor and 30 scholarships for Masters programmes in Israel.

The Ambassador also highlighted that Nobel Laureate Ms Ada E Yonath, who received the Nobel Prize in Chemistry with Dr. V. Ramakrishnan will be visiting India during March, 2015. Hon'ble Minister directed the officials that apart from academic conferences and seminars, we should facilitate meetings with young students who would be inspired and motivated towards research in Basic Sciences due to an interaction with Ms. Ada E Yonath.

The Ambassador also invited the Hon'ble Minister to visit Israel.

Share on Social Media
Previous article US $ 1006.20 Million Loan Agreement Signed Between India and World Bank for Education For All (EFA) Program - Sarva Shiksha Abhiyan III Next article Dr. Harsh Vardhan Requests Chief Ministers of All States For Their Cooperation To Set Up Super-speciality Hospitals Modelled on All India Institute of Medical Sciences (AIIMS) In Their States