https://www.moneycontrol.com/ Students holed-up even in the remotest part of the country will get access to education content using Swayam Prabha channels and radio, said union human resource development minister ...

The Vice President of India, Shri M. Hamid Ansari has said that the challenge for the modern world is to accept diversity as an existential reality and to configure attitudes and methodologies for dealing with it. He w ...

The Union Cabinet, chaired by the Prime Minister Shri Narendra Modi, has approved the signing of a Memorandum of Understanding (MoU) between India and Australia on cooperation in the fields of education, training and res ...

Under the Rashtriya Madhyamik Shiksha Abhiyan (RMSA), 1338 new Government secondary schools with a total outlay of Rs.837.78 crore have been approved till date in respect of Minority Concentrated Districts (MCDs). As per the Unified District Information System for Education (U-DISE) for the year 2014-15, out of 1338 secondary schools approved in MCDs, 960 secondary schools are functional.

The Sarva Shiksha Abhiyan(SSA) provides for opening of new schools, construction of school buildings, construction of additional classrooms, additional teachers, Kasturaba Ghandhi Balika Vidyalayas (KGBV), provides free textbooks to all children from classes I-VIII, provides Urdu textbooks for Urdu medium schools and where Urdu is taught as a subject, free uniforms (two sets) to all girls and children belonging to SC/ST/BPL. Priority is given to infrastructure for new schools, toilets and buildings in areas with concentration of minority population. KGBVs have been opened in Educationally Backward Blocks (EBBs) where the female rural literacy is below the national average to provide for residential upper primary schools for girls. The KGBV reaches out to (i) girls who are unable to go to regular schools, (ii) out-of-school girls in the ten-plus age group who are unable to complete primary school, (iii) younger girls of migratory population in difficult areas of scattered habitations that do not qualify for primary/upper primary schools. Among these girls KGBVs provide reservation for 75% girls belonging to Scheduled Caste (SC), Scheduled Tribes (ST), Other Backward Classes (OBC) and minority communities. 25% priority is given to girls from Below Poverty Line (BPL) families. A total of 555 KGBVs have been sanctioned for MCDs upto 31.3.2015.

Under the Scheme for Infrastructure Development in Minority Institutions (IDMI), an amount of Rs.11.45 crore has been released covering 126 minority institutions during the year 2014-2015.

The Ministry of Human Resource Development launched Rashtriya Aavishkar Abhiyan (RAA) programme on 9th July, 2015, inter alia, as a sub-component of SSA and Rashtriya Madhyamik Shiksha Abhiyan (RMSA), to motivate and engage children of the age group 6-18 years in Science, Mathematics and Technology through observation, experimentation, inference drawing, model building, etc. both through inside and outside classroom activities and processes.

In addition under SSA programme, a total of 19.78 lakh teacher posts have been sanctioned, against which 15.59 lakh teacher posts have been filled up by States/UTs, upto 31st March, 2015 to improve pupil-teacher ratios, imparting of regular annual-in-service teacher training to all teachers to update their skills & knowledge, distribution of free textbooks to children and providing on-site academic support to teachers through Block Resource Centres and cluster Resource Centres. States/UTs have also been assisted to conduct comprehensive external student assessment surveys to access gaps in student learning, in order to undertake corrective action. Under Computer Aided Learning (CAL) component of SSA, States/UTs have been supported financially to promote e-learning of Science and Mathematics at Upper Primary level.

The 19th Conference of the Commonwealth Education Ministers was held at Nassau, the Bahamas from June 22 to 26, 2015. The Conference which deliberated upon Quality Education for Equitable Development was attended by the education ministers of 38 Commonwealth countries. The Union Minister for Human Resources Development Smt. Smriti Irani led the Indian delegation which comprised Chairman UGC, Chairman NIOS and JS School Education and Literacy, MHRD.

While responding to the issue paper on Quality Education for Equitable Development: Performance, Paths, Productivity the Union Minister Smt. Smriti Irani said that there could be no more opportune time than now that the Commonwealth countries work towards a more coordinated and holistic approach towards rationalizing methods and processes for inclusive and qualitative expansion of education in the respective countries. She underlined the significance of creating common platforms for deliberations on issues of mutual concerns so that issues like expansion, equity and excellence could be addressed in an integrated perspective. She also observed that a key measure of inclusive education would require significant increase in skill development initiatives to meet the emerging human resource requirements. 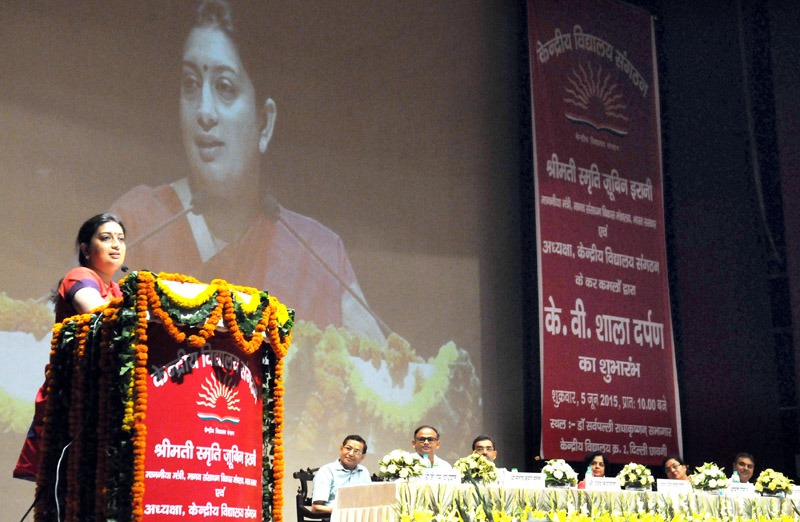 Elaborating upon the details the Minister said that this programme will be a step forward in the direction of fulfilling the vision of digital India of our Prime Minister Shri Narendra Modi. She further said that with the launch of KV Shaala Darpan, parents will get entire information at a unified platform about their children in respect of the attendance status, performance, health challenges and entire academic record from Ist to XIIth standard. Students will have facilities of e-tutorials and learning aids to enrich their knowledge. She made an appeal to the parents not to put unnecessary pressure on the children while availing the facility of getting instant information under this system.

The Meeting of the Consultative Committee of Parliament for the Ministry of Human Resource Development was held here today. The subject of discussion for the meeting was “National Education Policy”. The Union HRD Minister Smt Smriti Irani while introducing the topic of discussion welcomed the members attending the Parliamentary Consultative Committee Meeting. Minister of State for HRD, Shri Upendra Kushwaha also attended the Committee Meeting.

There has been a marked improvement in female literacy as per Census 2011. Though the male literacy is still higher at 80.9 percent than female literacy at 64.6 percent, the increase has been 10.9 percent compared to 5.6 percent of the males. The new Scheme Beti Bachao Beti Padhao, for promoting survival protection and education of girl child aims to address the issue of declining figures through a mass campaign targeted at changing social mindset and creating awareness. The right of Children to free and compulsory Education (RCE) act 2009 implemented under Sarv Shiksha Abhiyan aimed to increase the quality as well as accessibility of elementary Education in India.

Economic Survey points out that the overall Standard of Education in India is below global Standards. The Programme for International Students Assessment (PISA) which measures the knowledge and skills of 15 year-olds has rated Tamil Nadu and Himachal Pradesh only higher to other States in the Country. There is a considerable scope for Post-Secondary Education and Training System, as well as for places, to improve the Proficiency of young People.

The inadequacy of human capital at the base of the pyramid leading to a huge backlog in basic skills put become a big impediment in India’s growth as a result of the changing demography and declining child population. The Padhe Bharat Badhe Bharat initiative to create a base for reading, writing, and math fluency can be effective if the local administration is fully involved and sensitized in it.