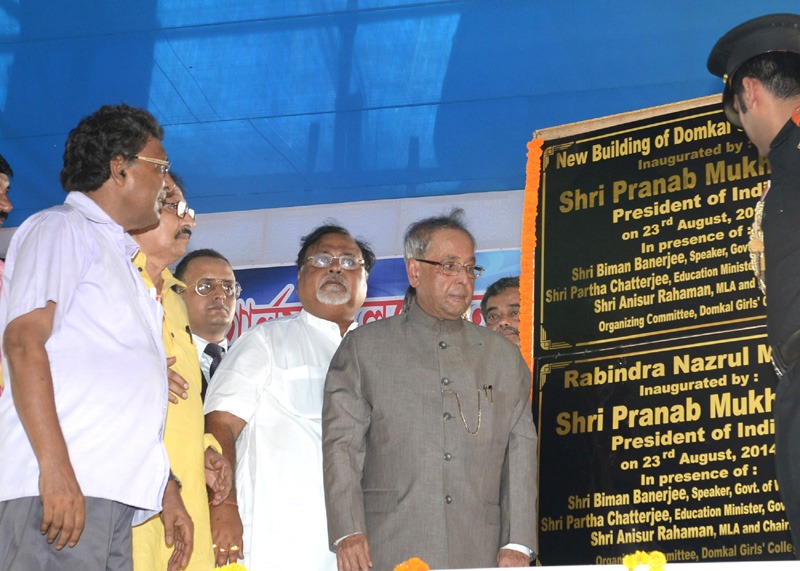 The President of India, Shri Pranab Mukherjee has underlined the importance of quality education starting from primary to post graduate level and necessity of women education for overall socio economic progress.

The President was addressing a gathering following the inauguration of a new building of Domkal Girls’ College at Domkal in Murshidabad district of West Bengal today (August 23, 2014).

The President said emphasizing quality education at every level would enable local boys and girls take maximum advantage of the premier educational institutions in the area. Focusing on the necessity of women`s education, the President said when a woman is educated, a whole nation is educated. An educated girl plays active role in the socio economic development of the country. The President said by 2030, one fifth of the total work force in the world would be in India. By that time, the average age of an Indian would be less than that in countries like China, USA and UK. India will have an edge over other countries in supplying skilled man power to the world. Every effort must be made to train and skill 50 crore people by 2025 as envisaged by National Skill Development Scheme.

Referring to the glorious history of Murshidabad, the President pointed out that the district now holds 9th position in terms of population but is the second poorest district in the country. He called for a change in this situation. The President also called upon teachers to inculcate a sense of discipline among students by setting an example.

Shri Biman Banerjee, Speaker of the West Bengal Legislative Assembly; Shri Partha Chatterjee, Education Minister of Govt. of West Bengal; Shri Abhijit Mukherjee, MP; Shri Badruddoza Khan, MP and Shri Anisur Rahaman, MLA and Chairman of the Governing Body of the College among others were present on the occasion.