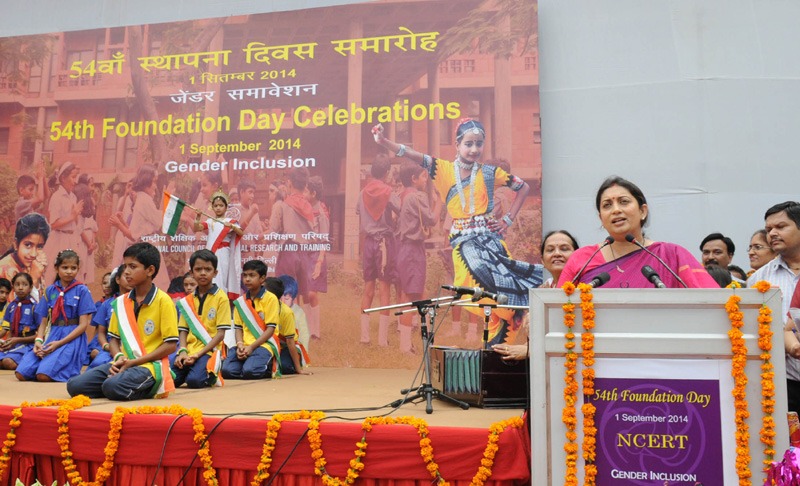 The Union Minister of Human Resource & Development Smt. Smriti Zubin Irani addressed the 54th NCERT Foundation Day celebrations at New Delhi today and motivated the participating students to take up the challenge of Gender Inclusion to eradicate gender bias from its root. The Minister of Women and Child Development Smt. Maneka Sanjay Gandhi was also present on the occasion.

The NCERT Foundation Day on Gender Inclusion was also celebrated in all its constituents, units at Ajmer, Bhubaneswar, Bhopal, Mysore and Shillong. It was celebrated along with joint activities of all the Departments of NIE (National Institute of Education) and CIET (Central Institute of Educational Technology) at the NCERT headquarter as well as in RIEs to focus on gender inclusion. Various activities on Sciences, Herbal Gardens, Science Kit etc were conducted as well as debate, quiz, Nukkad Natak, Kite Flying, Puppet show, folk dance/songs etc were performed. These activities were performed by the NCERT through huge participation of various Schools, NGOs, DIETs, and other voluntary organizations. The total participation including major Schools/DIET/NGOs was over 4000.

The NCERT has been giving enough focus on Gender Studies right from its inception in tune with the National Policy of Education 1986 and the National Curriculum Framework 2005, the NCERT has undertaken research, development of material, capacity building and support to stake holders through extension activities. The most recent initiative includes curricular material for Kasturba Gandhi Balika Vidalaya (KGBV) and capacity building of the teachers and teacher educators across the States and Union Territories.

The Department of Women Studies of NCERT has been recently renamed as Department of Gender Studies (DGS). The Department has developed material to strengthen Gender concerns in three volumes (Perspective on Gender and Society, Gender and Schooling Process and Gender and Women’s Empowerment). In the light of NCF-05, the gender concern has been incorporated in the textual materials of NCERT in all disciplines, Science, Maths, Social Science etc in an integrated form. Further an intensive exercise has also been taken by Department of Gender Studies to analyse the textbooks of the NCERT as well as that of States and Union Territories from the point of view of gender perspective. Tools for gender analysis are available on NCERT website.