Challenge for the modern world is to accept diversity as an existential reality and to configure attitudes and methodologies for dealing with it: Vice President Addresses Mohammed V University in Rabat, Morocco

Home Human Resource Development Challenge for the modern world is to accept diversity as an existential reality and to configure attitudes and methodologies for dealing with it: Vice President Addresses Mohammed V University in Rabat, Morocco 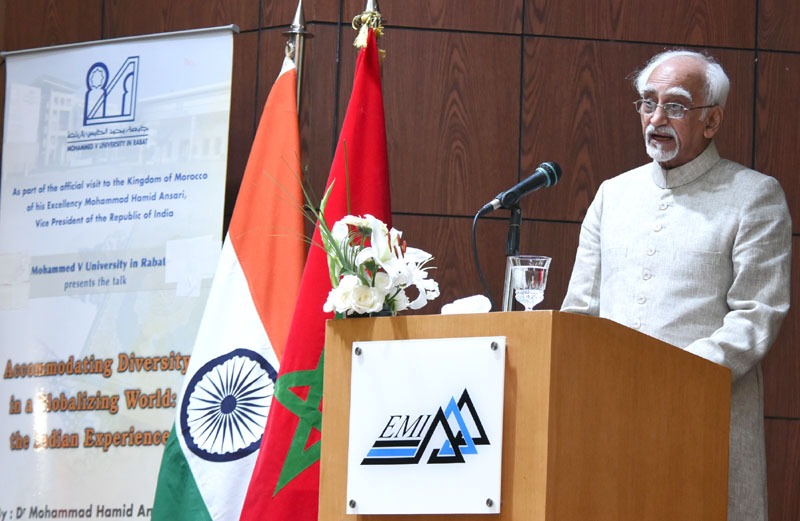 The Vice President of India, Shri M. Hamid Ansari has said that the challenge for the modern world is to accept diversity as an existential reality and to configure attitudes and methodologies for dealing with it. He was delivering a lecture at the Mohammed V University in Rabat, Morocco, today on the topic ‘Accommodating Diversity in a Globalising World: The Indian Experience’. The Moroccan University later conferred an honoris causa degree on the Vice President.

The Vice President said that Indian Muslims have lived in India’s religiously plural society for over a thousand years and that has impacted on modern India and its existential reality of a plural society on the basis of which a democratic polity and a secular state structure was put in place. He further said that the framers of our Constitution had the objective of securing civic, political, economic, social and cultural rights as essential ingredients of citizenship with particular emphasis on rights of religious minorities.

The Vice President said that the Muslim experience in modern India is that its citizens professing Islamic faith are citizens, consider themselves as such, are beneficiaries of the rights guaranteed to them by the Constitution, participate fully in the civic processes of the polity and seek correctives for their grievances within the system. There is no inclination in their ranks to resort to ideologies and practices of violence, he added. He further said that in countries having complex societal makeup, accommodation of diversity in political structures and socio-economic policies is not an option but an imperative necessity ignoring which can have unpleasant consequences.

The Vice President said that the Indian model was of relevance to our globalizing world because in India, an attempt was being made to look beyond the traditional virtue of tolerance and seek acceptance of diversity and adopt it as a civic virtue.