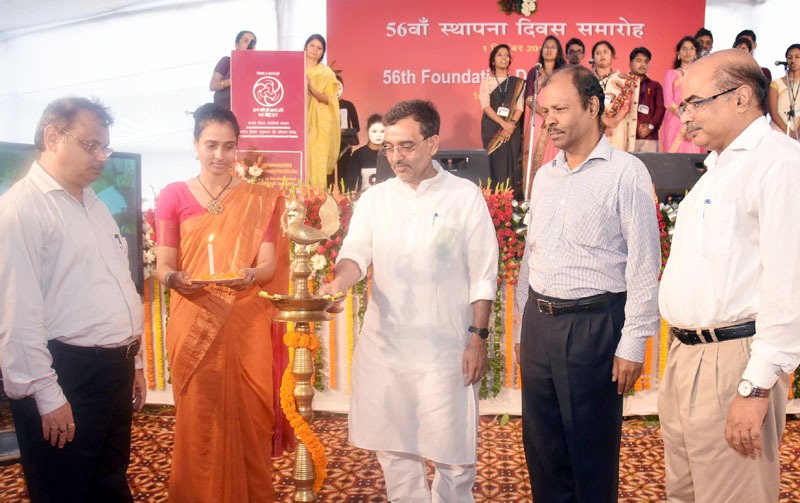 Minister of State for Human Resource Development Shri Upendra Kushwaha presided over the 56th Foundation Day of National Council of Educational Research & Training in the NCERT Campus in New Delhi on 1st September. Minister of State for Human Resource Development said that in pursuance of the policy of the present Union Government every effort will be made to promote the quality of school education as this forms the very foundation of our education system. Praising the valuable contribution of NCERT in the field of research, training, curriculum development and extension, Shri Kushwaha said that further intensive efforts should be made by the Council to disseminate information so as to reach the schools in every corner of the country. He wanted that a good science laboratory should be provided in every school in the country. This will encourage scientific urge in our students.

Minister of State expressed concern over the fact that during the past decades numerous schools have been opened but these are still to become institutions of learning in true sense. Shri Kushwaha also visited the stalls put up by all the constituent Regional Institutes of Education, Ajmer, Bhopal, Bhubaneswar, Mysore, and Shillong, Departments of at National Institute of Education, Central Institute of Educational Technology, Pandit Sunderlal Sharma Central Institute of Vocational Education. Minister of state emphasised upon strengthening network or regional institutions as well. He also interacted with the faculty members.

The students from all the Regional Institutes of Education Ajmer, Shillong, Bhubaneswar, Mysore, and Bhopal entertained the audience to various cultural programmes, highlighting general equality, inclusive education and unity in diversity.

Addressing the gathering, Union Secretary, School Education & Literacy, Dr. Subhash Chandra Khuntia appreciated the good work done by the NCERT and has been in the forefront in the field of elementary education. He said NCERT is developing e-content for all classes in all subjects and I am sure this programme will be successfully completed within one year. He hoped that the Council will be in the forefront in the aspects of environment and population education.

Director of NCERT Prof. Hrushikesh Senapaty expressed satisfaction that NCERT during the last 55 years of its existence has done a lot in the past and is determined to do much more in times to come. He also said that NCERT has collaborated in various fields with countries like South Korea, Indonesia, Bhutan, Srilanka and Afghanistan. NCERT is also undertaking projects in Meghalaya and Madhya Pradesh in collaboration with UNESCO. The Council has done sincere work in the Sarva Shiksha Abhiyan (SSA), Rashtriya Madhyamik Shiksha Abhiyan (RMSA), e-Pathshala etc. Our contribution in the field of research and formulation of National Curriculum Framework is notable. Furthermore, our contribution in the qualitative improvement in secondary education is also worth mentioning.

Joint Director Prof. B. K. Tripathi dwelled on the history of the 55 years of NCERT’s existence. He said NCERT touches every corner of the country in the spread of education. He appreciated the gracious presence of the retired faculty of the NCERT in the celebration of the 56th foundation day. He expressed satisfaction that we have moved fast in the past and will continue to move faster in future too with an agenda of quality school education.

Secretary, NCERT Prof. Sridhar Srivastava thanked everyone for gracing the function and making the event memorable.