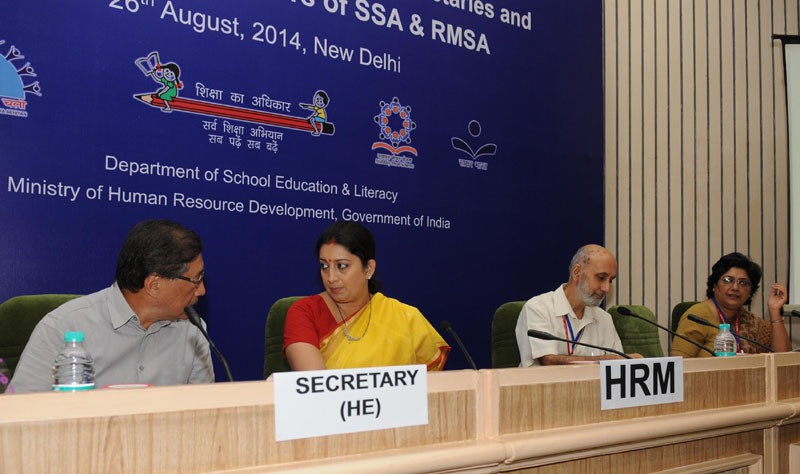 The Conference of State Education Secretaries is being held here today. The Conference was inaugurated by the Union Minister for Human Resource Development, Smt. Smriti Irani. She sought the States’ co-operation in improving school education. She spoke about the need for improvement of quality of schools which still remains a challenge.

The Minister launched "Padhe Bharat Badhe Bharat" programme which focuses on early reading, writing and comprehension and early grade mathematics. She requested States for the roll out of this programme in their respective States with the strong resolve so that children in early grades acquire proficiency in writing, reading and comprehension that would enable them to progress to higher classes with the confidence of good education. During 2014-15. Rs 2352.57 crore has been allocated to States/UTs for improvement of quality programmes.

The updated information provided by the States/UTs reveal that 17.24 lakh children in 6-14 years age group are out of school as on 31st March, 2014. The number of out of school children has been reducing steadily in the ...

The Government of India through the National Council of Educational Research and Training (NCERT) has been conducting National Achievement Surveys (NAS) for classes III, V and VII / VIII to provide information about the learning achievement of students at regular intervals. Till date the NCERT has completed three cycles of such surveys. The outcomes of the latest third cycle of NAS is given as follows:

According to the household survey conducted by States/UTs and reported in their Annual Work Plan and Budget (AWP&B) submitted to this Ministry, the number of Out-of-School Children has considerably declined to 17.24 lakh in 2014.

NCERT undertook a project on “Development of Guidelines for Special Training of Out-of-School Children under RTE Act” during 2011-12. The prime purpose of these Guidelines is to facilitate the state level functionaries working in this area by providing suggestive strategies and understanding on pedagogical processes required for mainstreaming out-of-school children.

As per Unified District Information System for Education (UDISE) 2013-14, the Teacher Pupil ratio in Government schools is 1:29 at primary level and 1:32 at upper primary level. Persistent teacher vacancies and lack of p ...

The updated information provided by the States/UTs reveals that 17.24 lakh children in 6-14 years age group are out of school as in 2014. States having the most out of school children are, Rajasthan (2.98 lakh), Jharkhan ...

The Model School Scheme envisages setting up of 6,000 model schools as benchmark of excellence at block level at the rate of one school per block. The scheme has two modes of implementation, viz. (i) setting up of 3,500 ...

The Government of India has signed a financial agreement with the World Bank’s International Development Association (IDA) for an amount of Special Drawing Rights (SDR) 651.00 million (equivalent to US$1006.2 million for ...

The Union Human Resource Development Minister today released the Flash Statistics: Elementary Education in India: Progress towards UEE for the year 2013-14. The Statistics are prepared annually by National University of ... 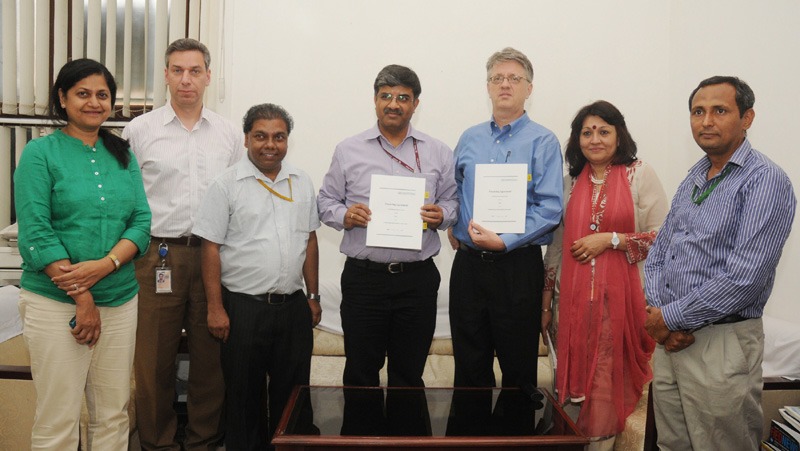 Sarva Shiksha Abhiyan (SSA) is the largest ongoing Education for All (EFA) program in the world. It is the flagship programme for universalizing elementary education. The overall goals of the program include universal access and retention, reducing gender and social category gaps in elementary education and enhancement of learning levels of children.

The Centre has launched a massive programme of School Leadership to provide training to about 9 lakh principals / headmasters in Government and Government-aided schools to enable improvement of standards of education in the country. The scheme was launched by Human Resources Development Minister Dr. M. M. Pallam Raju in New Delhi, last evening.

Launching the National Programme for School Leadership Development, Dr Raju said that it is a massive task to initiate a nation-wide programme owing to an array of diversity in our schools. He also stated that a common model of leadership will not suffice and there is a need to work on multiple leadership styles to improve school climate and performance. He said that the focus on school leadership development provides thrust to the quality of education.

The Minister added that Regional Centres of School Leadership would be set up by National University of Educational Planning and Administration (NUEPA), in collaboration with other regional institutes of repute to bring about long term sustained engagement and capacity building in schools.

The #EFF9 debate "To school or not to school?" took place on Monday, 20 January 2014 at Westminster Central Hall, London ahead of BETT 2014. The debate was held at the Education World Forum with over 100 internation ...